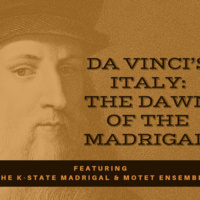 Da Vinci's Italy: The Dawn of the Madrigal

The K-State Madrigal & Motet Ensemble presents a short concert of music from the turn of the 16th century as part of the Flint Hills Discovery Center's Da Vinci Day festivities.

Leonardo da Vinci's world saw enormous changes in the arts and sciences, including the birth of the genre that would capture the music world for generations - the madrigal. The program will explore the roots of the art form as well as several of the important composers who had a hand in its development.

Performances will be held at 11:30am and 1:30pm in the atrium of the Flint Hills Discovery Center.

Between the two performances, community members are invited to learn about and view a sampling of the K-State School of Music, Theatre, and Dance's collection of Renaissance era instruments

The K-State Madrigal & Motet Ensemble is a one-on-a-part auditioned ensemble of K-State students who specialize in the historically-informed performance of early vocal music.

More information about the Madrigal & Motet Ensemble can be found k-state.edu/music/mtd/choirs.