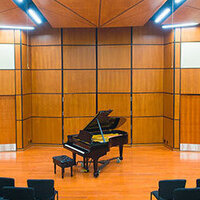 Join us for a Guest Artist recital featuring the du Toit / Lee Duo on flute and piano.

A strong advocate for the musical arts, Cobus is an avid soloist, chamber musician, and pedagogue who is on the faculty at the University of Massachusetts Amherst. As an international soloist and chamber musician, Cobus has performed with orchestras in Russia, South Africa, and the United States and on concert series in Taiwan, Japan, Germany, and France. Cobus has been a prize winner at over a dozen competitions, which include the 1st UNISA Southern African National Competition for Woodwinds and Brass, the Byron Hester Competition, the Myrna Brown Competition, and the SAMRO International Scholarship Competition.

In addition to being the principal flute for the Boulder Chamber Orchestra, Cobus is also the flutist for the Antero Winds, a professional woodwind quintet that has been prizewinners at both the Plowman and Fischoff chamber music competitions. Cobus can be heard on Naxos records featuring the complete recording of Jacques Castérède’s flute oeuvre in addition to two self-produced recordings available through online platforms: Tríptico with classical guitarist Patrick Sutton and Mythavian with pianist Doreen Lee.

Doreen Lee is the Assistant Professor of Collaborative Piano/Piano at the University of South Alabama. Dr. Lee has performed with notable artists such as Takács Quartet violist Geraldine Walther, Colorado Symphony Orchestra Principal Horn Michael Thornton, flutists Christina Jennings and Katherine Kemler, and cellist Johannes Moser, among others. She is also the pianist of the du Toit / Lee Duo, formed in collaboration with flutist Cobus du Toit. The duo's debut album, Mythavian, takes inspiration from mythological folklore and birdsong.

Lee received her Doctorate of Musical Arts in Collaborative Piano at the University of Colorado Boulder, studying with Margaret McDonald and Alexandra Nguyen. She specialized in solo piano performance under the tutelage of Walter Ponce at the University of California Los Angeles, and went on to earn her Masters in Music at the Peabody Institute with Benjamin Pasternack. She was selected to perform in master classes for pianist and music theorist Robert Levin at the Summer Academy Mozarteum in Salzburg. As a collaborative pianist, Lee has received instruction from members of the Takács, Cassatt, and Tokyo Quartets as well as Jean Barr, Anne Epperson, and Jonathan Feldman. She has participated in various music festivals including the Bowdoin International Music Festival, Aspen Music Festival and School, and the Music Academy of the West.