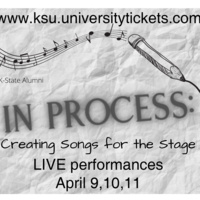 In Process: Selections from Alumni Musicals

Seating will be picnic-style on the playing field and socially distanced. Bring a blanket and friends and enjoy the first outdoor theatre event of 2021.  Please enter via the south end of the field near the alumi center.

IN PROCESS will feature scenes and musical selections from works created by 4 K-State alumni: Blake Cordell, Charissa Bertels, Tim Aumiller and Alex Wakim. Each piece is very creative, unique and still in process. Some have had readings, some are still in the works, some have won awards and a couple have even been workshopped here at K-State.

In this present-day homage to the musicals of the 40s, there are bouncy tunes, tap-dancing and the high stakes of losing a family business surrounding a boy meets boy love story. Blake Cordell wanted to portray a world where the queer romantic core was accepted and not the battle to be fought much like the Mickey and Judy movie musicals.

Three strong, independent females seek to find their place in the male dominated society of the Civil War. High drama and a blue-grass/Appalachian-inspired score combine to explore themes of freedom, equality, and intersectional feminism featuring the historical figures Dr. Mary Walker, the only female to receive the Congressional Medal of Honor; Mary Jane Richards Bowser, a Union spy during the Civil War and Jennie (Levi) Hook, a trans male who fights for the Union.

THE YEAR AFTER
By Tim Aumiller and Scott Schneider

A quintet of New Yorkers confront the realities of seeking love, losing love and enduring relationships in a time of personal and political chaos in 2017, the year after.

It is the story of a first-generation Lebanese-American who returns to Beirut to uncover the stories of the past and explore what it means to live in two different cultural worlds while also dealing with a budding romance.