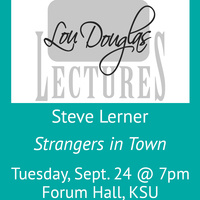 Co-sponsored with UFM, the KSU College of Arts and Sciences Diversity Lecture Series and the KSU Department of Sociology, Anthropology and Social Work

As more attention is given to the topics of diversity and immigration in the United States, many platforms have shed a negative light on the increased number of immigrants and refugee populations. Activists have emerged to counteract the hate and discrimination these minorities face. In our region, Steve Lerner, psychologist, filmmaker, and musician, has become a prominent ally for these communities.

Lerner’s recent short film, Strangers in Town, shares the story of how Garden City, KS, has dealt with global migration in the past century and how the town’s citizens have adapted without anger or hate. Per a Data USA report, Garden City was home to individuals from more than 35 different countries in 2015. The film, which is comprised of multiple interviews, shows the benefits and positive outcomes of accepting diversity and welcoming people from different cultures. The Kansas perspective is a unique bonus.

A discussion with the filmmaker will follow the showing.

Steve Lerner is a psychologist, filmmaker, and musician. Starting his filmmaking career in 1972, his first film, addressing mental health, won Honorable Mention at the Marin County Film Festival. He went on to found Menninger Video Productions and Equal Partners Productions. Lerner’s cultural film, Tras Bambalinas (Behind the Scenes) won Best Documentary in the Kansas/Missouri Short Film Festival in 2009. He continues to produce short films highlighting different cultures which have received many honorable mentions and awards for both his directing skills and films.