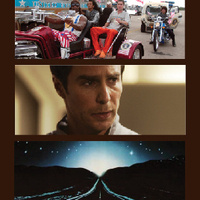 Saturday, February 29, 1 p.m., Idiocracy
How do you imagine the future of our society? In this 2006 comedy, Luke Wilson plays a man who wakes up after 500 years of dormancy in a cryogenic preservation experiment.

Saturday, March 21, 1 p.m., Moon
In this 2009 film Sam Rockwell plays an astronaut who works alongside his robot computer GERTY (voice by Kevin Spacey) and is about to end his three-year period on the Moon mining precious resource to send back to Earth. He experiences a personal crisis that changes his life.

Saturday, April 4, 1 p.m., Close Encounters of the Third Kind
Unidentified Flying Object? Military operation? Extraterrestrials? One man’s quest for the truth leads to an unimaginable reality in this 1977 classic.

Arts and Culture, Science and Technology